Kubernetes is a container orchestration tool that has quickly become the industry standard for managing large applications. Its popularity is due to its flexibility and scalability, which make it ideal for handling the complex deployments of modern applications.

But what exactly is Kubernetes?

In short, it is a system for automating the deployment, scaling, and management of containerized applications. It was originally designed by Google, and is now maintained by the Cloud Native Computing Foundation. Kubernetes has become so popular that it is now supported by all major cloud providers, including Amazon Web Services, Microsoft Azure, and Google Cloud Platform. So if you’re looking to get started with Kubernetes, there’s no shortage of options.

There are many factors to consider when choosing a deployment strategy for Kubernetes. The most important thing is to choose a strategy that best fits the needs of your application. 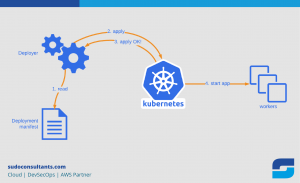 The Recreate deployment strategy might as well be called the “blow it all up and start from scratch” strategy. It’s useful when you need to make sure that your application is running on the latest code or configuration, but it’s not exactly gentle.

With Recreate, Kubernetes will delete all of the existing pods for your application and create new ones in their place. This approach has some advantages – for example, it can help ensure that your pods are always running on up-to-date code – but it also has some clear drawbacks. First, it can lead to significant downtime for your application while the new pods are being created. And second, it can result in data loss if your pods are storing any persistent data. As a result, Recreate is best used in situations where downtime is acceptable and data loss is not a concern.

If you’re looking for a tried-and-true method that’s been battle-tested in production environments, you can’t go wrong with the rolling update strategy.

This approach involves gradually rolling out changes to your application or system, while ensuring that new deployments don’t cause service disruptions. As each new version is deployed, it replaces the previous one, and all traffic is routed to the new version. This gradual rollout reduces risk and gives you the chance to fix any potential problems before they impact all users. And once the new version is up and running, you can simply remove the old one from the system. So if you’re looking for a deployment strategy that’s both effective and efficient, the rolling update approach is definitely worth considering.

Blue/green deployments are a popular choice for teams that want to minimize downtime and risk during updates. The strategy is simple: two identical production environments are maintained, one “blue” and one “green.”

When it’s time to push out an update, the blue environment is taken offline and the green environment is brought online. If any problems arise, the blue environment can quickly be brought back online. Blue/green deployments provide a number of benefits, including reduced risk, less downtime, and easy rollbacks. However, the strategy does have some drawbacks. For example, maintaining two production environments can be costly, and there is always the possibility that the wrong environment will be taken offline. Overall, though, blue/green deployments offer a solid option for teams looking to minimize risk during updates.

Anyone who’s ever tried to change a production system knows that it’s a risky business. One mistake can bring everything crashing down, leading to lost productivity, frustrated users, and maybe even a few angry phone calls. That’s why many organizations take a cautious approach to deployments, slowly rolling out changes to a small group of users before making them available to everyone. This is known as a Canary deployment.

The goal is to minimize the risk of a failed deployment by identifying potential problems before they affect the entire system. To do this, new code is first deployed to a subset of servers, and then monitoring is used to identify any issues that might arise. If everything looks good, the code is then deployed to the rest of the servers. This process can be repeated several times until all of the servers are running the new code. While Canary deployments can help to reduce the risk of a failed deployment, they can also be time-consuming and may not be appropriate for all organizations.

If you’re like most people, the words “A/B testing” bring to mind images of blue buttons versus green buttons or headlines with slightly different word choices. But A/B testing isn’t just for marketing campaigns – it can also be a valuable tool for developers working on Kubernetes deployments. By testing two different versions of a deployment – for example, one with a new feature and one without – developers can gain insights into how the new feature will impact performance and stability. If the results of the test are positive, they can roll out the change to all users; if not, they can revert to the previous version. In either case, A/B testing helps to ensure that changes are made with confidence, improving the overall quality of the deployment.

Have you ever heard of the term “dark launch?” No, it’s not some new goth club that just opened up. In the world of software development, a dark launch is when you deploy a new feature or service without enabling it for all users. This allows you to test the new feature in a production environment without affecting the overall user experience. If everything goes well, you can then “flip the switch” and turn on the new feature for everyone. If not, you can quickly roll back the changes without anyone being the wiser.

The dark launch is a popular deployment strategy for big releases because it minimizes risk and downtime. So next time you see a service or website go down for “maintenance,” it might just be undergoing a dark launch.

If you’re looking for a robust and reliable way to deploy your Kubernetes applications, you can’t go wrong with the red/black deployment strategy. With this approach, you simply launch two identical copies of your application in parallel.

The “red” copy is the one that handles all incoming traffic, while the “black” copy remains idle. Once the black copy is up and running, you then point all new traffic at it and take the red copy offline to perform any needed updates. This ensures that your application is always available, even during deployments.

Plus, if you need to roll back a deployment, you can simply switch the traffic back to the red copy. Red/black deployments are reliable, efficient, and easy to understand, making them a great option for anyone looking to get the most out of Kubernetes.

So there you have it, the 7 Kubernetes deployment strategies and when you should use each one. Hopefully this has given you a good understanding of the available options and when to use them. But remember, there is no one-size-fits-all solution, so be sure to evaluate your own needs before deciding on a deployment strategy. And as always, if you have any questions or need help getting started, feel free to reach out to our team of experts.